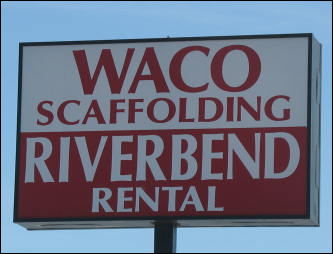 In 1950 after retiring and closing his butcher shop, Leonard C. Diegnau was bored.  He responded to an advertisement in a Minneapolis newspaper for a salesman to sell steel tubular frame scaffolding for a new manufacturer, the Wilson Albrecht Company.  Taking the W from Wilson, the A from Albrecht and the CO from company, the name was now shortened to Waco.  As Leonard pulled a trailer load of scaffolding behind his Oldsmobile to various work sites around the five-state area, it became clear to him that the cost of the scaffold system didn’t set well with the smaller contractors.  He asked if they would prefer to use the scaffolding and pay him for the usage.  An overwhelming acceptance of this practice started the scaffolding rental industry.  The next step was to have the scaffolding available to everyone from Des Moines, Iowa to Duluth, Minnesota.  Leonard hit the road again with a new goal of finding and creating Waco dealers to stock his rental scaffolding at their locations.  Leonard would buy the inventory and the dealers would handle the rentals on a commission basis

The Mankato location originally started in an old farm house with a small warehouse on one of Len’s properties.  This area was also being used as the Lundin rock quarry off Third Avenue.  As Lundin sold the quarry rock, Len received a percentage of the sale.  This site is now the Calpine Power Plant location.

During the late 1960s early 1970s, the Army Corp of Engineers began the reconstruction of the flood dikes in Mankato.  The Corp purchased fill from Len’s property along Highway 169.  This fill was taken from the hillside which created a flat area on the property.   By this time, the company had outgrown the Third Avenue location and a new office building and warehouse was built on the newly created flat area along Highway 169.  This has been our location ever since.

Once the new buildings were finished, there was room to expand product offerings and services.  The natural fit was to provide contractor tools and equipment both for rental and sale.  The tool, equipment, and rental product offering continued to grow and a showroom expansion and additional warehouse were built in the 1990s.  With the addition of more and a wider variety of general rental equipment, the name Riverbend Rental was added to the company.

Leonard passed away in 1984 and was active in the company until his death.  Upon Leonard’s death, the company was kept in the family as ownership passed to his niece, Alice Winch.  Alice retired in 1995 leaving the company in the hands of her son, Dennis Winch and longtime employee James Kortuem.  James retired in 2008 and Alice passed away in 2009.

With the passing of Alice, ownership of the company was again kept in the family and passed to Dennis.  Dennis semi-retired in 2013 after 25 years with the company.  Dennis’s son Nathan, the fourth generation of this family owned company has now taken over the daily operations.

With the assistance of our valued and loyal employees, Waco Scaffolding has continued to grow the selection of rental equipment, services, tools and products to this day.

Blast From The Past!